Why do notaries insist on board resolutions? 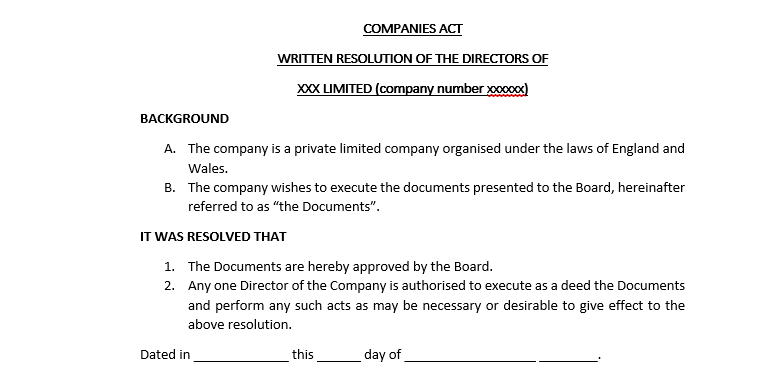 This week we deal with a very common question from our corporate clients:

You are a Director of a UK Company. You may be the only Director, or you may be one of many. Either way, you are not used to having your authority questioned – you are a Director and as such can usually sign anything on behalf of your company.

Now you want to expand your business abroad, and every time you sign something the notary keeps mentioning a resolution. Why?

Let’s run through an example.

Your company makes fantastic cars. You want to sell some of these cars to José, a Brazilian reseller.

Brazilian authorities insist you sign a contract of sale in front of a Brazilian notary in a specific way. You’re not going to travel all the way out to Brazil for José, nice though he is. You already have plans here in the UK to keep expanding your company.

The Brazilian notary doesn’t know who you are. They want a notarised version of the power of attorney, confirming the company exists, that you are a director, and that you had the power to sign. This is to protect José, who may transfer money to you and never get those amazing cars he wants to buy from your company.

You can sign anything though, can’t you? In the UK most people check you are a Director and take you at your word. Isn’t that enough?

Not quite. While that works in most cases when dealing with transactions solely in the UK, due to a doctrine within UK Company Law known as apparent authority, notaries cannot rely on this.

The doctrine is clearly laid out in the Companies Act 2006. At section 40, it confers protections on parties who, in good faith, rely on an act authorised by a director. However, there are two things to note about this provision:

Therefore, what is usually fine for the UK is not something notaries can rely on, and usually not something even parties want to rely on, being so far away and unlikely to be able to sue in the UK (the only way they could be most sure UK law would be correctly applied).

A quick refresher on UK company law, then. Companies are a legal fiction. They aren’t real, physical people, but count as one. The way they operate is determined by their rules, established by the owners (members or shareholders). These rules are called the Articles of Association. They make clear who can make decisions, and any specific procedures they must follow, in order for it to count as a decision of the company (instead of just your personal one).

The Companies Act 2006 brought in simplified Model Articles of Association which are the ones most used by companies formed under it. It states:

3. Subject to the articles, the directors are responsible for the management of the company’s business, for which purpose they may exercise all the powers of the company.”

There is usually some form of this statement in most companies’ Articles of Association – while the shareholders or members own the company, the Directors are in charge of managing it, and can exercise the powers of the company in its name.

So far so good, then, right? You are a Director.

Except, it mentions directors, plural. In fact, most Articles also have a provision similar to Model Article 7:

7.—(1) The general rule about decision-making by directors is that any decision of the directors must be either a majority decision at a meeting or a decision taken in  accordance with article 8 [titled Unanimous decisions, it deals with Written Resolutions instead of a board meeting].

(a) the company only has one director, and

(b) no provision of the articles requires it to have more than one director,

the general rule does not apply, and the director may take decisions without regard to any of the provisions of the articles relating to directors’ decision-making.”

So any act in the name of the Company must have been agreed at a board meeting or in in an unanimous written resolution.

Meetings must be called and held in accordance with the Articles too – they will determine how much notice a meeting needs, how many people need to be present, and which people can vote.

Any decisions passed by the Directors of a company are called Directors’ Resolutions, and companies are under a legal duty to keep a record of any such decisions (usually referred to as Minutes).

Usually, the notary needs to see evidence of these collective decisions (or the minutes confirming these decisions were taken) to be able to confirm that the Company as a whole intended to sign the document you want notarised.

It does mean the Notary will be reading your Articles and sometimes asking what may seem to be strange questions – but are probably necessary to ensure your Articles have been followed.

Ideally, at the meeting the necessary number of Directors (a quorate majority) will have resolved to authorise you to sign by yourself on behalf of the Company – and then you can book a meeting with the Notary and sign the document, bringing with you evidence of that resolution. The alternative would be to have all Directors come sign, which is not always ideal.

And note – if your Articles are prescribing methodologies you don’t like, you can always hire a notary or other lawyer to amend them for you!